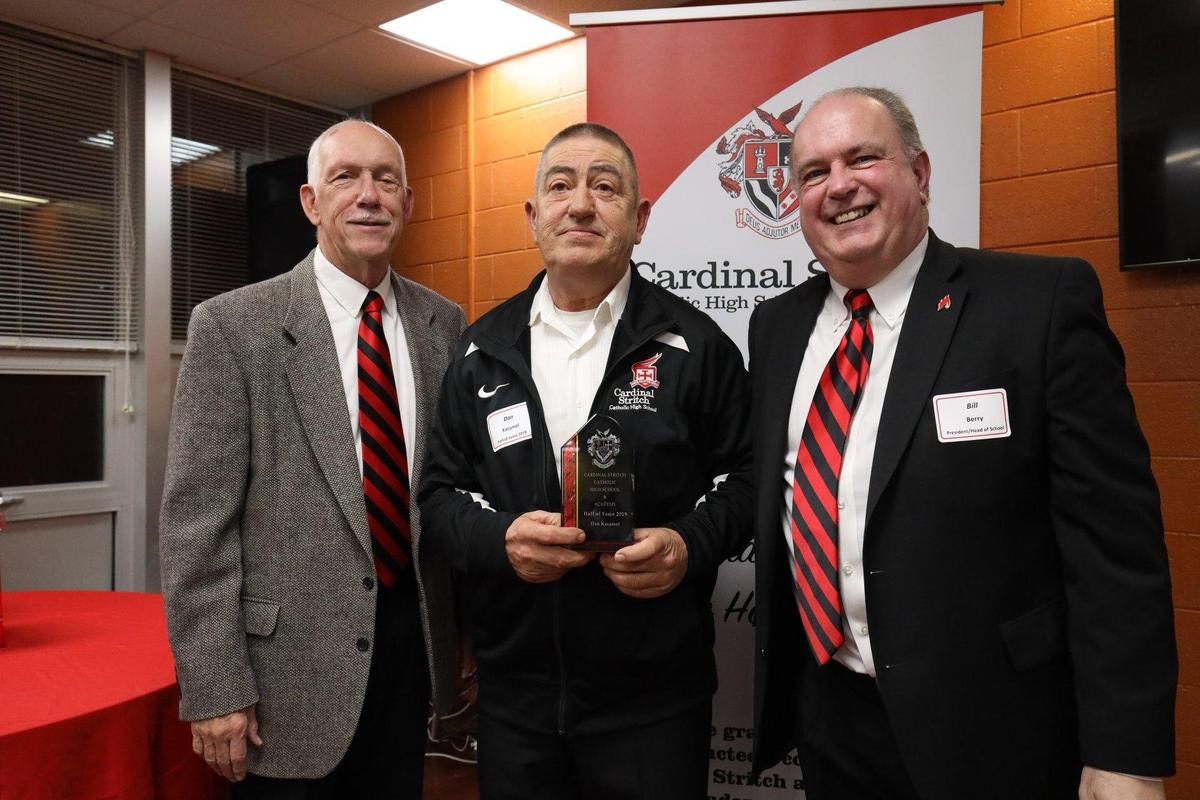 Dan is a 1974 graduate of Woodward High School. Nine days after graduation he entered the Marine Corps and was discharged six years later on October 7, 1980, with the rank of E-6 Staff Sergeant.

He began his employment at Cardinal Stritch in early 1986 and since then has witnessed many changes with the faculty, staff and administration, along with renovations and upgrades to the physical structures on campus.

Dan knows every inch of this campus inside and out, in its current stage and all of the stages since his tenure here began. He has also received numerous Certificates of Appreciation over the years. Dan is a self-taught man of every trade, who literally can fix anything. Whoever he has worked with on special projects over the years, large or small, he either learned their skills or taught them his. He has built, torn down and then rebuilt many walls and classrooms over the years and has ran miles and miles of cable and electrical wire throughout the campus. He was an integral part of the building of the fitness center, working closely with Phil Rudolph, Jr., of Rudolph/Libbe, Inc., and all of the sub-contractors, mainly apprentices in the various construction trades. His name is also on the plaque that was unveiled at the center’s dedication in February 2003: The Rudolph/Karamol Fitness Center.  In the mid 2000’s he coordinated the construction of the 40ft. x 60ft. pole barn, located on the west side of campus, that is so neat and meticulously organized, you know an ex-marine is in charge of its contents! Over the years Dan has made many friends who would drop whatever they were doing to help him finish a project, and he in turn, was and still is, there for anyone who ever needs help or assistance. He is honest, true and selfless.

The years have had some many fun moments too. From the total burial of the spirit rock on the east side of campus while Fr. Frank Murd was Principal in the late 1980’s (and by the way it is still buried!), to transporting a turkey to Napoleon, Ohio, while it was strapped securely in the back seat of the car. If you don’t know the “turkey” story, be sure to ask Dan about it and be ready to laugh so hard your stomach will hurt!

Dan and his wife, Kimber, have five children: Ashley, Jacob, Jenny, Stacy and Danielle and six grandchildren. He is grateful for his family and honored to be called “Dad and “Papa”.

Dan states that he is “honored, surprised and thankful” to be recognized for his 33+ years of employment and feels fortunate to have such a great job. He hopes that all students realize the importance of a good education, inside and outside of the classroom. 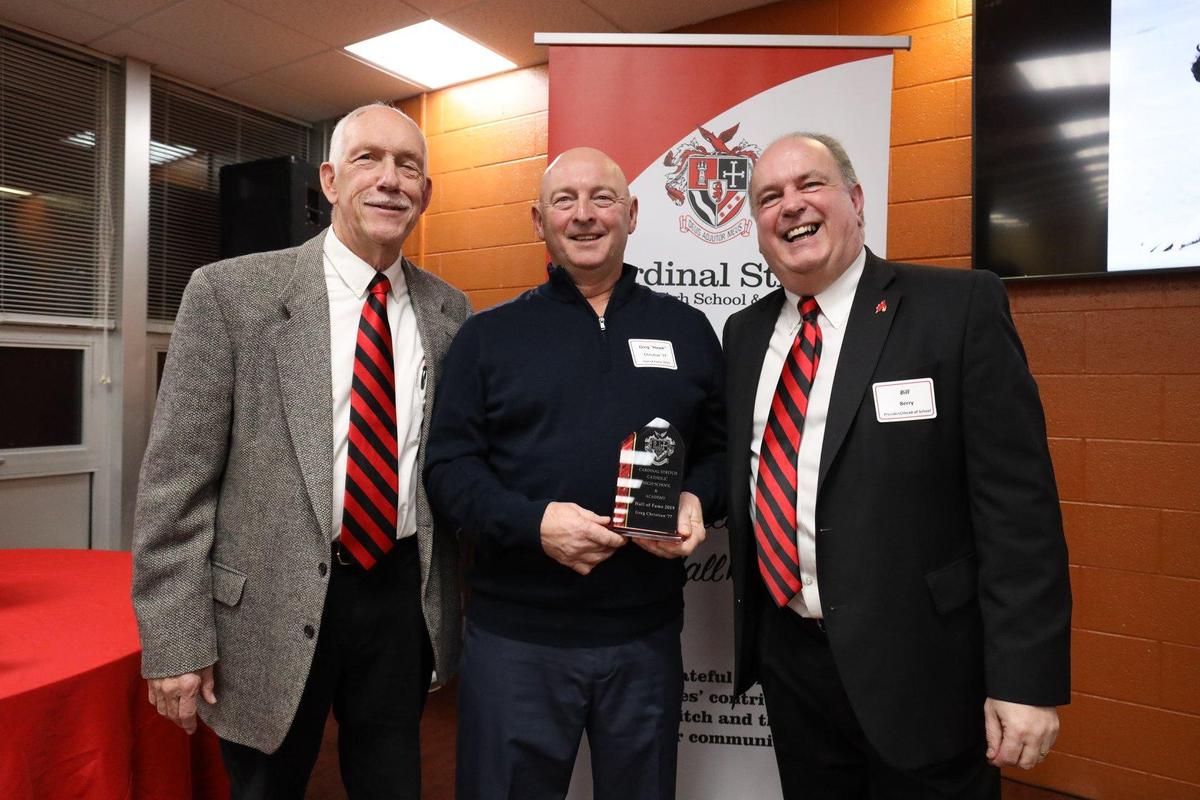 Going to the state-semi finals for football in 1976 and beating both St.John’s and St.Francis were some of Greg’s favorite memories. While also being inducted into the Birmingham Hall of Fame, Greg believes it is an honor to be recognized in yet another Hall of Fame with all of the great people of Cardinal Stritch.

After graduation, Greg became the boy’s varsity basketball coach, a varsity football assistant under Ralph Orsini and then the boys varsity baseball coach. Greg retired as Stritch’s all time winningest baseball coach with over 150+ wins. Along with his long history with Cardinal Stritch, he also coached 5 years with St. Johns Jesuit baseball and held a 99-31 record with 3 league championships.

Together Greg and Jill (Hatfield ’76) have three children: son Kacy, Cardinal Stritch class of 2000, two daughters: Kylee Byrd and Kendyl Christian, and three grandchildren - Kash and Knox Christian and Bowie Rue Byrd. They are expecting the birth of their third granddaughter in December.

Greg states, “I am very thankful to have been a part of such a great organization.” 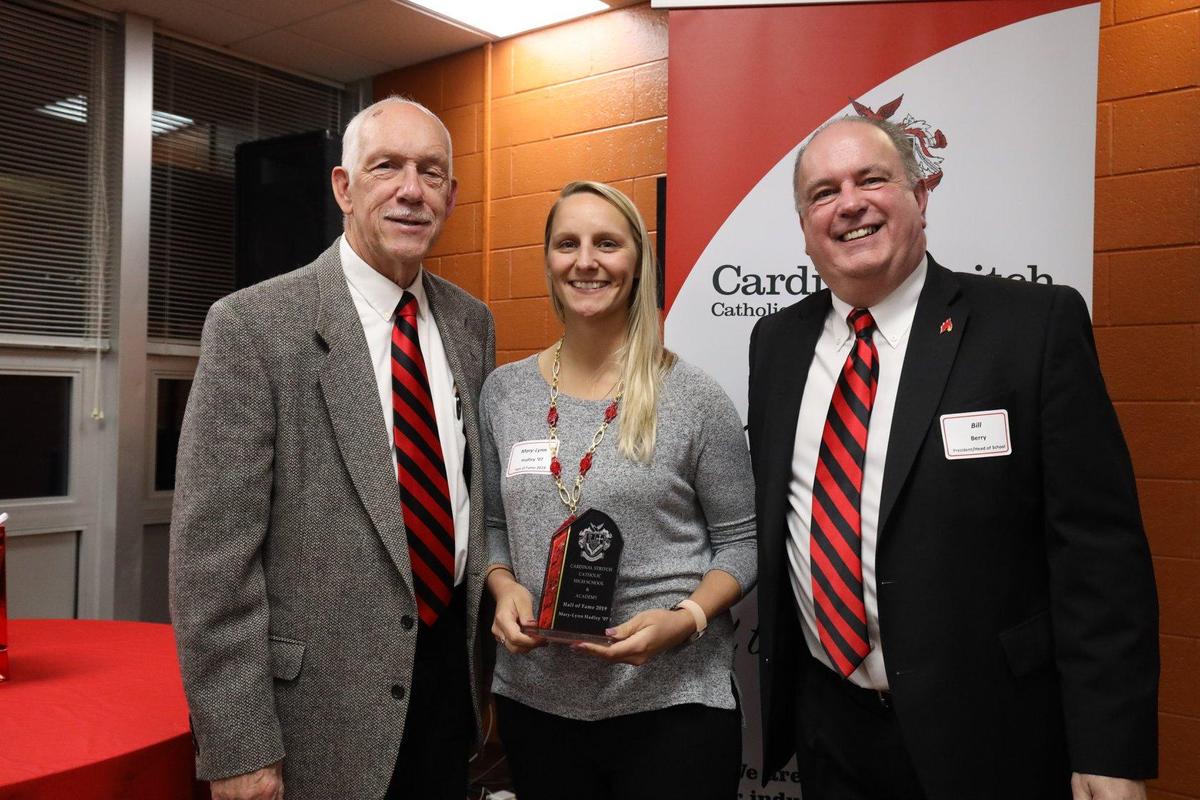 Mary-Lynn stated: “To say I am honored would be an understatement. Being inducted into the Hall of Fame means more than being honored, it means history, legacy, and breaking barriers by going against the societal norm. One cannot help but be humbled and honored to be a part of such an elite group of people. To carry on my grandmother’s, Mary Szabo Bollinger ’71, legacy of paving the way for women’s sports and then building upon that legacy by paving the way for women to compete with men is monumental!”

During her time at Cardinal Stritch, she was a Kairos leader, Homecoming Queen, Link Crew leader, and she has multiple athletic awards and accomplishments.

After her high school career, Mary-Lynn attended Slippery Rock and played soccer. Starting as a forward on the women's team, she and her team reached the NCAA playoffs. She obtained a Bachelor’s degree with a 3.8 GPA  while being recognized on the Dean’s List all semesters. She then obtained her Master’s degree with a 4.0 GPA. Mary-Lynn completed the Army ROTC program commissioning as a 2nd Lieutenant in the US Army National Guard and graduated top 4% of all National Guard soldiers and top 20% of all Active Duty soldiers.

A lesson for today’s students: Amelia Earhart once said, “Some of us have great runways already built for us. If you have one, take off. But if you don't have one, realize it is your responsibility to grab a shovel and build one for yourself and for those who will follow after you.” 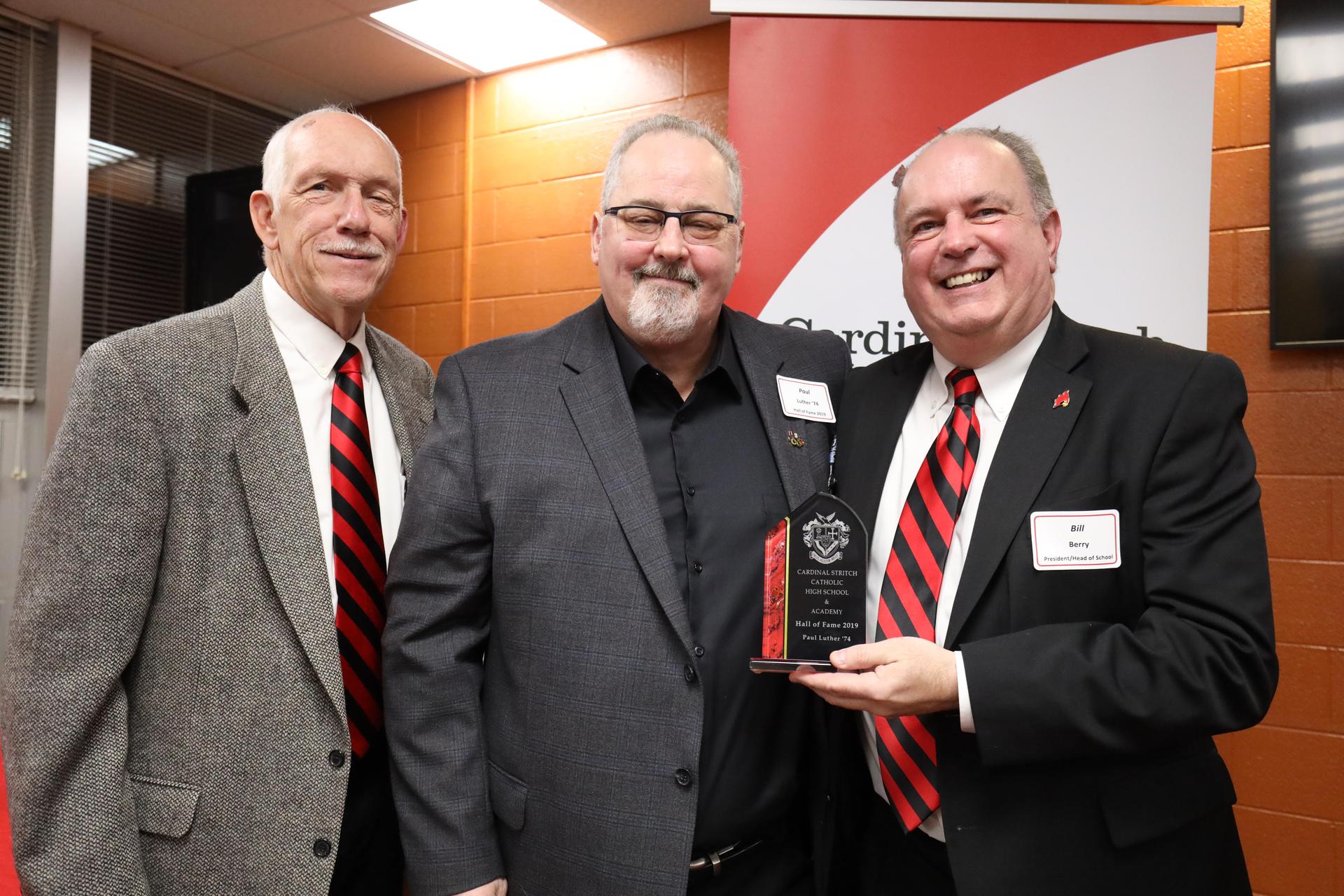 During Paul Luther’s ‘74 time at Cardinal Stritch, he had many accomplishments. Paul was a Student Council class treasurer and Vice President, a 2x state wrestling champion with multiple individual awards and records broken. Paul is a City Champion, CIT Champion,  and the 1973 City League MVP.

His favorite Stritch memory was when his team won the 1973 City League wrestling championship… the first city league title for Cardinal Stritch.

Paul is now retired, working production for 18 years at the Maumee Stamping plant. He was an hourly FTPM Coordinator for 12 years with 30 years seniority (retiring in 2007). Paul and his wife, Beth, have been married for 37 years and have three children, one grandchild, and two step-grandchildren.

His lesson for today’s students “The Cardinal community is a wonderful example of what love and diversity can accomplish.” 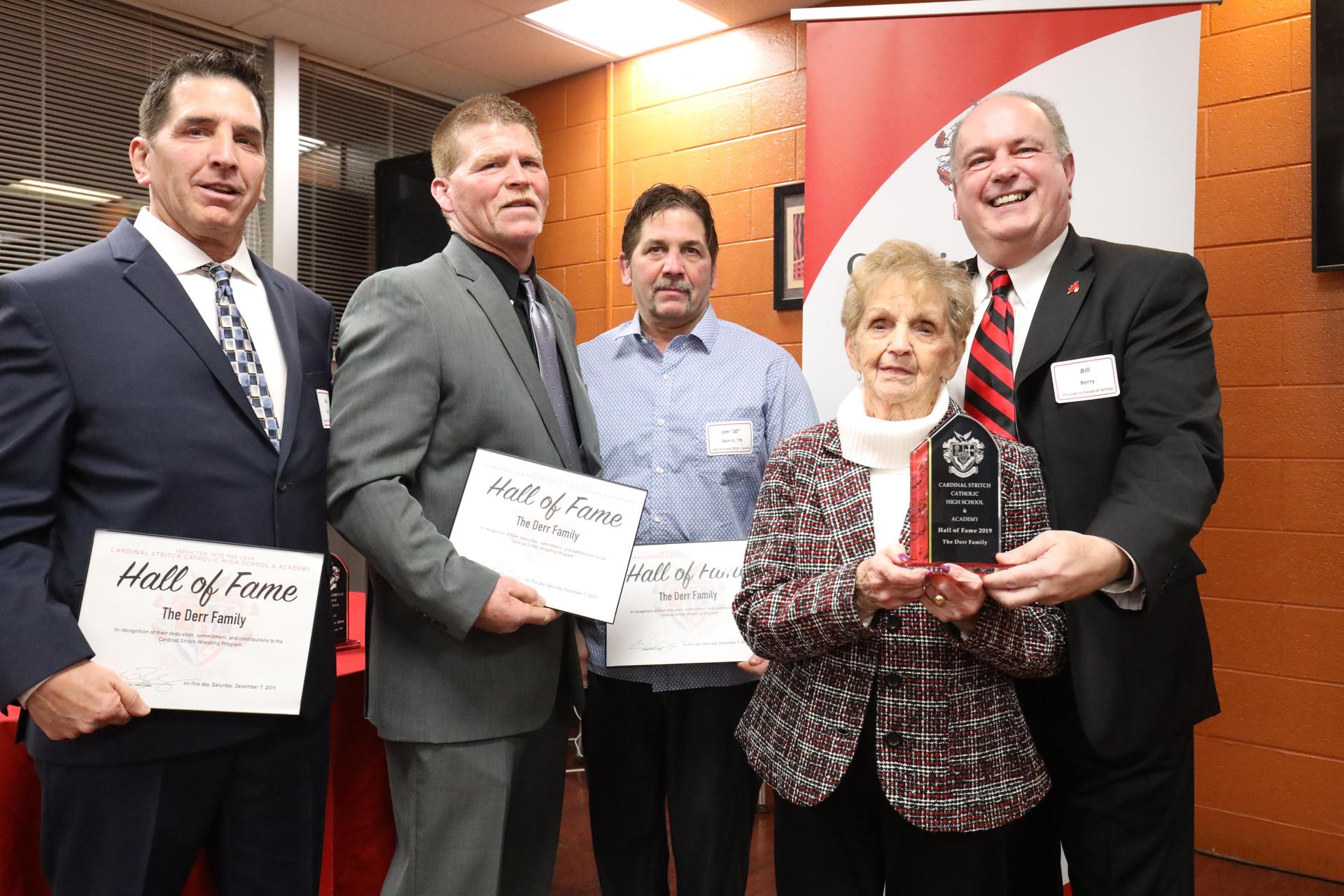 Wrestling runs deep in the roots of the Derr Family. The patriarch, James E. Derr, played football and wrestled at Waite High School and continued wrestling in college at Bowling Green State University. His wrestling coaching career lasted over 35 years, coaching at Northwood and Perrysburg high schools and starting the Biddy Wrestling program at Stritch. He was instrumental in starting the
wrestling program at Northwood, and in 1999, the Northwood Invitational, which began in 1966, was renamed the Jim Derr Northwood Invitational. Cardinal Stritch, by the way, won 13 of the 50 tournaments. While at Perrysburg, Jim established the prominent Perrysburg Invitational Tournament and when the World Cup of Amateur Wrestling was held at the University of Toledo, he helped former UT wrestling coach, Joe Scalzo, run the tournament. He was inducted into the OHSAA, Toledo City League, and Perrysburg High School Hall of Fames. Jim passed away in 2002 at the age of 66.

Jim and his wife, Betty, also known as Big Daddy and Little Mama, were huge behind the scenes supporters of Stritch Wrestling. They helped set up, tear down and run matches and tournaments, assisted with team travel arrangements and even supervised the mat maids. Both times, when Stritch hosted the prestigious Catholic Invitational Tournament (held off-site because of the size of the tournament), they, and many others, including Jim Intagliata, helped run the entire tournament. When the Lincoln Wing was built in the late 1970’s, they were right there, alongside the Bergman family, and many others again, helping. Until the Lincoln Wing was constructed, wrestling practice was held on the school stage.

The Derr sons, Jim II (JD) ’79, Mike ’81 and Don ’82, were naturals at the sport and
wrestled constantly, even at home. If Betty was lucky they would move the furniture before they started. Once when the boys were roughhousing and Don had JD on his shoulders and JD was beating on him, they ran right through the dining room wall! There was also a scale in their house and they would weigh themselves at all times of the day and night.
Silence was good, meaning they were at or under weight, but a scream or a slam on the scale meant the opposite. All three boys were successful in their high school careers, whether in dual or tri-meets or placing in, or winning, numerous tournaments each.

JD ’79 feels privileged that his family is being recognized for their contributions to Stritch Wrestling with their induction into the 2019 Hall of Fame. There are countless memories, a myriad of emotions. He feels that being coached by Tom “TD” Talbott was an opportunity of a lifetime. The intensity, dedication and motivation that TD brought out in his wrestlers was beyond measure. “Winning meets or tournaments as a team was the most exciting. The feeling was electrifying! Our crowds were crazy with spirit and the mat maids were fantastic!”, he commented. Another special memory is helping coach Scott Zapadka ’89, from 6th grade on, and watching him become a 2-time State Champion. 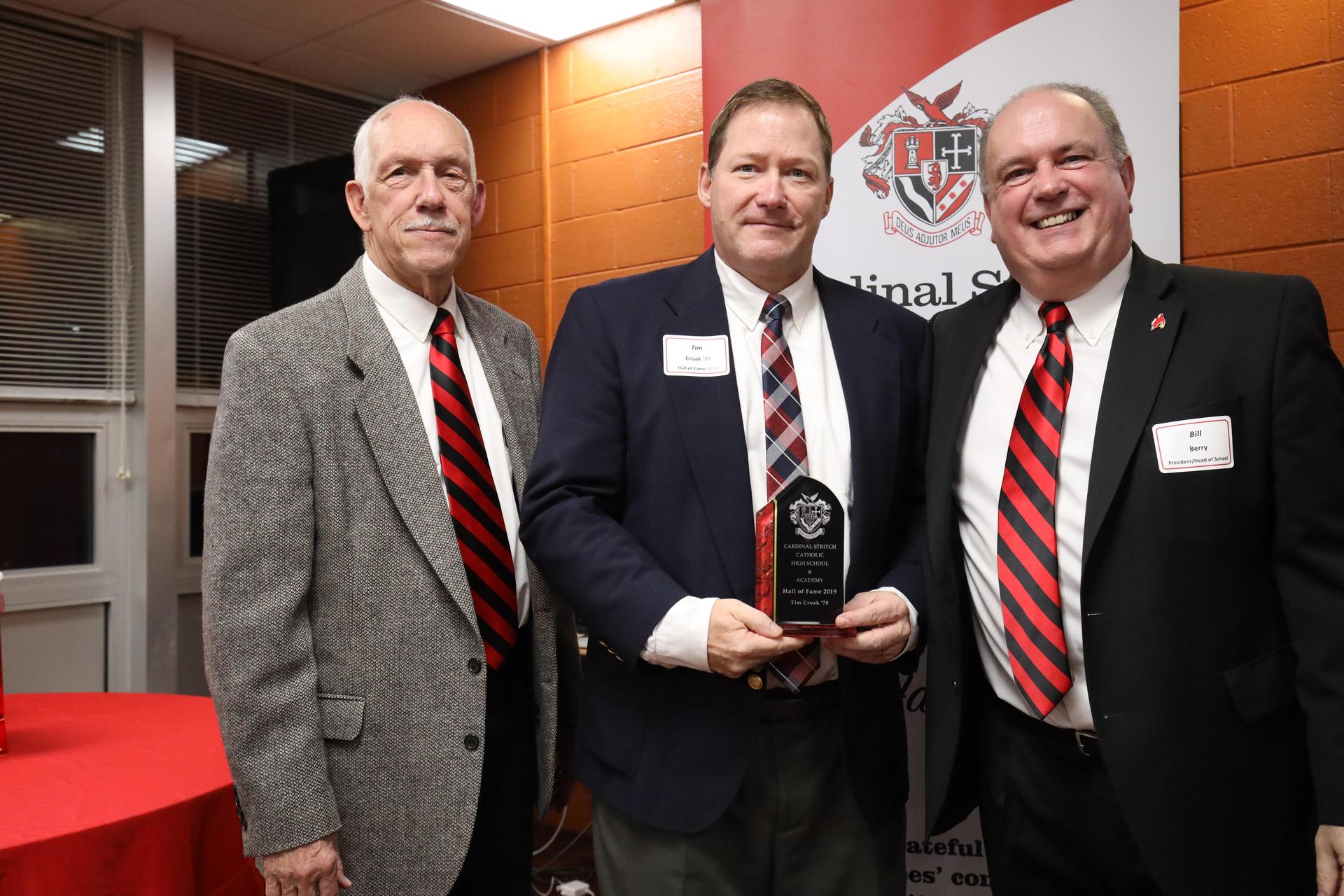 From the class of 1978, Tim Croak states “Wherever I go and with everything I do, I try to represent Cardinal Stritch. Every hope, dream, and aspiration my parents had in sending me there is what I try to fulfill every day.”

The opportunities to live a full and rewarding life have never been greater. Advances in technology, nutrition, and connectivity mean that current students have a much higher potential than ever before. Keep in mind life is about two things: relationships & experiences. They start in high school and they should last your entire life.

During Tim’s time here at Cardinal Stritch, he was a 3-year letter winner and captain his senior year in football. Along with his athletic achievements, he was also a part of the student council and took on the duties of the treasurer position.

Tim is a part of the University of Toledo’s President's Club, on the Board of Trustees of Mercy College, and a board member at Unison Health, Family Services, Red Cross, and Cardinal Stritch Catholic High School & Academy.
Author of "The Light: A Guide for Living Life with Awareness, Honor, and Purpose" 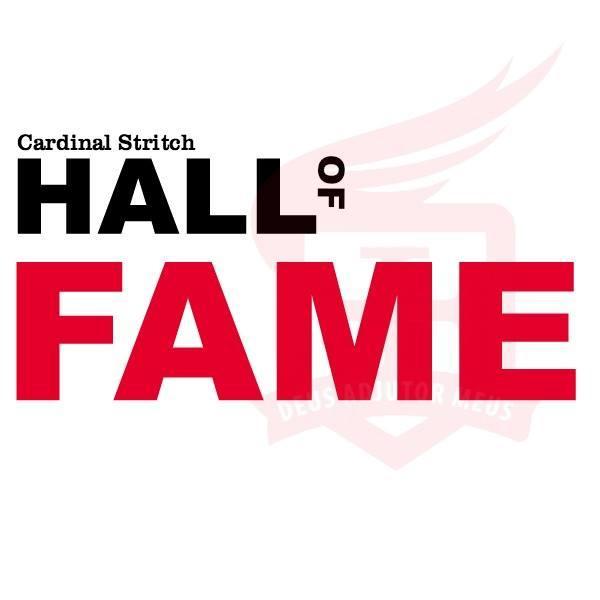