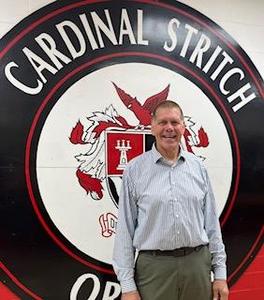 As the commitment, regulations, and logistics of high school athletics change, Cardinal Stritch Catholic High School & Academy is committed to a restructure and expansion of their athletic program. With this restructure, they are pleased to announce that Denny Shoemaker has joined Cardinal Stritch as the interim Athletic Director. Mr. Shoemaker welcomes the opportunity to work with coaches, student-athletes, and the community to not only build our current programs, but also resurrect programs that have been missing in recent years.

President / Head of School Bill Berry said, “Our commitment and focus remains on the importance of our athletic programs and its student-athletes, both academically and athletically.”


Mr. Shoemaker is no stranger to coaching and the athletic world. He recently retired from Sylvania Northview High School where he taught math, was an administrator in their athletic department, and has 27 years of experience coaching both the boys and girls basketball programs. Under Mr. Shoemaker’s leadership, Northview finished with a 148-119 record, three Northern Lakes League titles, and one Great Lakes League title.